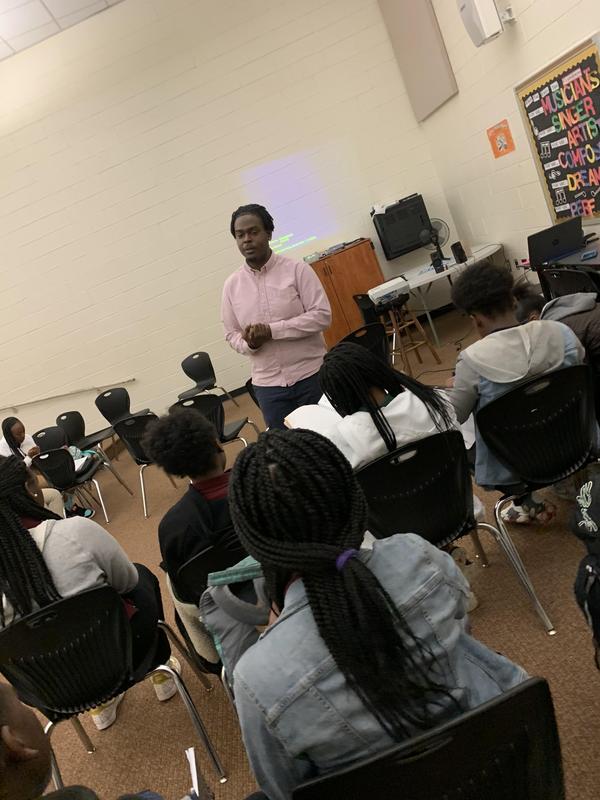 With the lights dim and students most attentive, the youthful Lee Central Middle School (LCMS) Music Teacher Jarvis Jett delivers more than a melody lesson to the 14 students in his second block.

They are learning about African-American singer, songwriter, musician, arranger and civil rights activist Nina Simone. Her music hailed from nearly every genre including classical, jazz, blues, folk, R&B, gospel, and pop. The students were captivated by her story as much as they were her music. None was more awestruck than LCMS eighth-grader Tyrin Perkins and his sister seventh-grader Zykera Perkins.

“She was a very independent, good woman,” says Zykera with the inflection that you might hear from someone much older. “She loved playing the piano. Her man beat on her.”

While the news of her personal battles weighed heavily on their minds, it was what she in turn did with the story that most interested young Tyrin.

“So every time she would go through everything, she used to put that in her music,” says Tyrin. “So, like the song, ‘I Put a Spell on You,’ it’s like when she was getting abused and stuff, she was saying, ‘I put a spell on you because you’re mine,’” Tyrin explains.

The students must understand the story behind the lyrics, says Jett. The collaboration of the various disciplines in teaching music enhances the learning experiences, which incites a greater ability for critical thinking, creativity and understanding in students, he intimated.

An integrated approach is the best way to introduce the physics of sound and music and the various styles and disciplines to students.

Admittedly, the students had never heard of her before walking through the doors of Jett’s classroom. You wouldn’t know it though after a week of learning her music and mantra. Jett describes Simone as a hidden treasure.

“It is very important for students to know who Nina Simone is in regards to black history month because she was a civil rights activist…not only an activist, but she was a classical pianist, she was a gospel pianist,” says Jett. “The importance that I find to us is…she was locally raised in Tryon, N.C., so I feel like it’s important for students to know someone local who did not receive much national attention.”

The students seemed to relate well with her small-town background, which mirrored their own. Among the whispers in the room, was the notion that Simone made it out despite her zip code because of the support of those in her town who cared – those like Jett who have decided to invest their lives serving others by way of music.

Jett was a child prodigy, playing the piano skillfully at the age of six. The self-taught Jett later learned to read music in high school band. He too is a singer, songwriter, musician and arranger, who by many accounts has made an indelible mark on music in the state of South Carolina.

He earned the bachelor’s in music industry and vocal performance from South Carolina State University. His wife, Charla, makes the journey to work with him each day as the PowerSchool coordinator at LCMS.